Real Dimensions in Time and Space 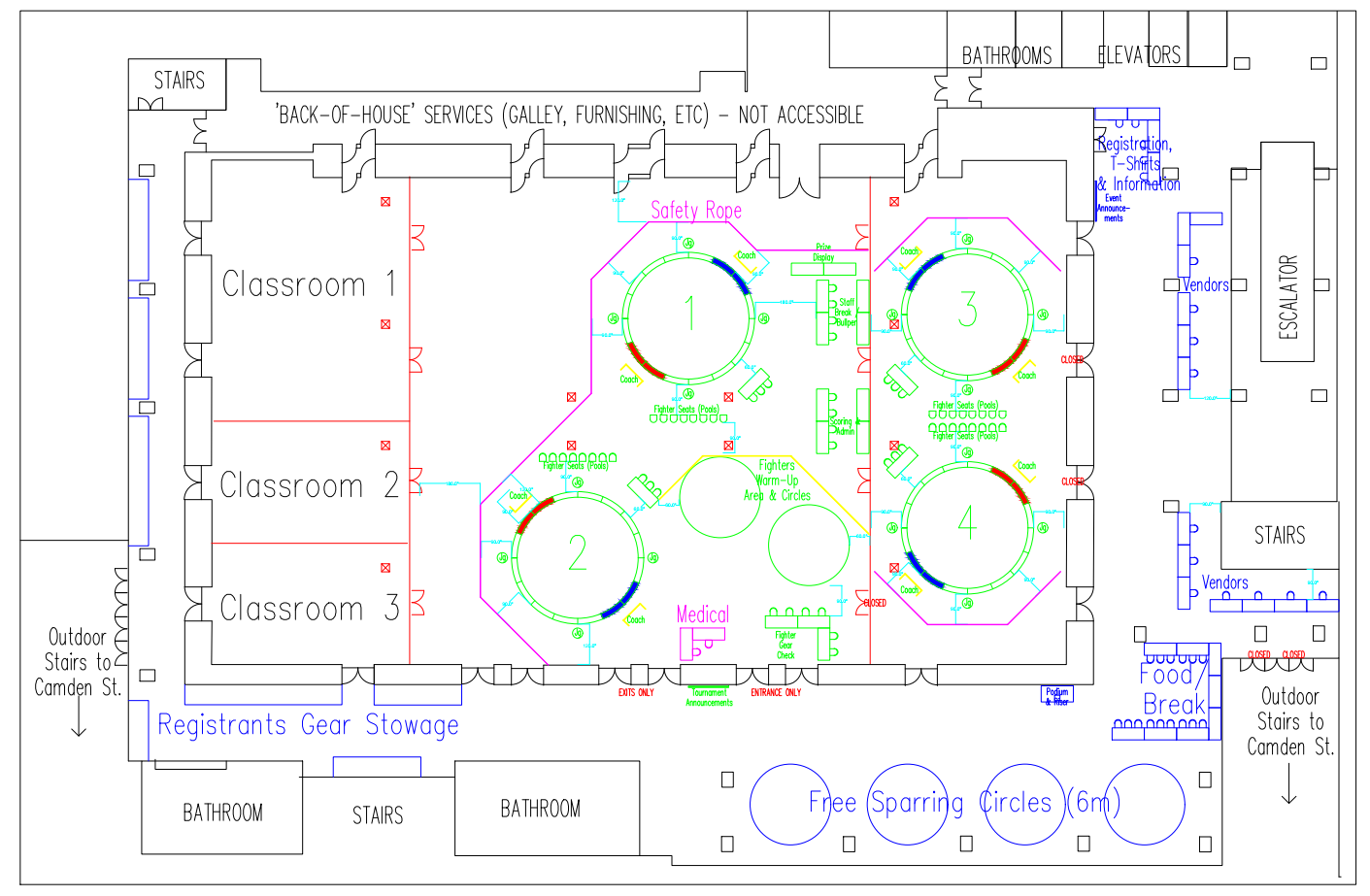 Both Jake Norwood and Ben Michels have mentioned in posts on Facebook and the Longpoint blog alluding to the fact that, this year, Longpoint is not only expanding the tournaments, but also significantly expanding the space for NON-tournament activities. So, let's take a look at our current floorplan.

Of perhaps minor, but somewhat important, note: the bathroom facilities immediately available around the Ballroom are much larger than those at Turf Valley. In fact, there are two separate banks of restrooms (one at each corner of the hall).

The Lobby/Foyer area alone is multiple times larger. Turf Valley had a Hallway about 130’ x 15’. The Baltimore Hilton Ballroom has a Foyer which wraps three sides of the Ballroom, and totals over 400’ in length, with a varying width that allows for areas to be dedicated to some specific purposes. We will have a dedicated Gear-Stowage hallway, an area for Vendors larger than last year, and at least one set of tables dedicated to break/rest/snacking. In addition, the widest section will allow us to place Free-sparring circles, that will be available throughout the whole event, in front of the Bay windows which look out over the ballpark across the street.

At LP 2016, the Cameo Ballroom, in which most of the classes were held, was 85’ x 53’. Most of the schedule included two classes at a time in that space. Our projected Classroom space at the Baltimore Hilton for 2017 is comprised of a space which measures 126’ x 50’. In that space this year, we are tentatively planning to separate into three classrooms (one larger, two smaller).

This year, we have space to run classes on Thursday, and more space every other day. Because of this, and because of the larger space we have available, we are certain that there will be AT LEAST 100 hours of available non-tournament time throughout Longpoint 2017. If you come for classes or similar this year, you can find yourself with less ‘down’-time, and far more from which to choose than ever before. Our schedule at the moment, found here, does a good job of displaying just how much space we have to fill. Our non-tournament to tournament schedule this year is just about 1 to 1, not including our dedicated free sparring circles.

Finally, the hotel lobby bar is much larger, and no further than was previously the case. The hotel is surrounded by bars, restaurants, and lounges, improving upon our social opportunities of previous years.

Every year, the scheduling directors of Longpoint work hard to try and pack in as much of an event into the time we have. Our intention is for everyone to get the amount of fighting, learning, and general revelry they want out of the weekend. We want everyone to feel they got their money’s worth.

Right now, our size – the size of the tournaments, the number of classes – is designed with a specific length-of-day built into the event schedule. It’s already long. Last year, for example, Friday had TEN HOURS of consecutive Longsword fighting, and the Passage at Arms after that. The fighting rings were busy from 0800 to 2030 . That’s a long day. There is a high burn-out factor already. And we are anticipating using the same or similar schedule this year, but with double the amount of rings.

One way or another, this depends on you, the participants in Longpoint, to be a part of making this event what you want it to be. The stronger and larger our community that attends and helps out, the better the whole thing becomes for everyone. The earlier everyone registers, the earlier we know how many people are really going to attend, the better our planning becomes, and the more we can offer, now and in the future.

So, register and put yourself on the waiting lists for tournaments, if that’s a goal for yourself. If that is not your only goal, register early, and we promise that, for everyone, there will be more and better classes, free sparring, and general fun than we’ve ever had before. Class announcements will be coming shortly.